Do you want to know how to remove Ring Doorbell on your own? Don’t worry. In this article, you can learn about the easiest ways to remove the device itself, faceplate, and battery.

Whether you want to remove it to replace it with a new one or repair, the steps and tips mentioned here are useful.

You may also like: What’s The Best Tool to Remove Ring Doorbell?

The Ring Doorbell is an excellent device that provides your home with extra protection. Replacing a traditional doorbell, it can also turn into a speaker and camera or a video streaming device.

Even when you are not at home, you can use most of its features to strengthen your security.  All these thanks to the smart app that accompanies the Ring Doorbell. Before we start, it’s good to know more about the different models of Ring Doorbells.

There are Ring Doorbell and Ring Doorbell 2 with a built-in rechargeable battery. Ring Doorbell Elite and Pro, on the other hand, has better specs. However, they need to be hardwired or connected to a doorbell transformer to work.

Newer versions include Ring Doorbell 3 and Ring Doorbell 4 Plus. The first model has added features such as two-way communication with noise cancellation, night vision, and privacy zones. It also has a dual-band Wi-Fi that can run on 2.4 GHz and 5GHz networks.

Ring Doorbell 3 Plus is about the same as Ring Doorbell 3 but with an extra feature. It has Pre-Roll Video, which gives the device an advanced motion detection ability. While an incoming person approaches, Ring Doorbell can already detect them.

It is great to have such a brilliant device. But at some point, you will need to remove it. Maybe it got damaged and isn’t working anymore. Perhaps you want to upgrade to a higher model. Either way, it is good to learn to remove Ring Doorbell on your own.

Why Would You Want to Know How to Remove Ring Doorbell?

Ring Doorbells are powered by a battery, at least most models. The battery can last 6 -12 months. After this, you need to charge it. When your battery finally runs out, don’t you need to know to remove Ring Doorbell’s cover to replace or recharge it? Recharging is one of the many possible reasons why you would want to remove your Ring Doorbell. 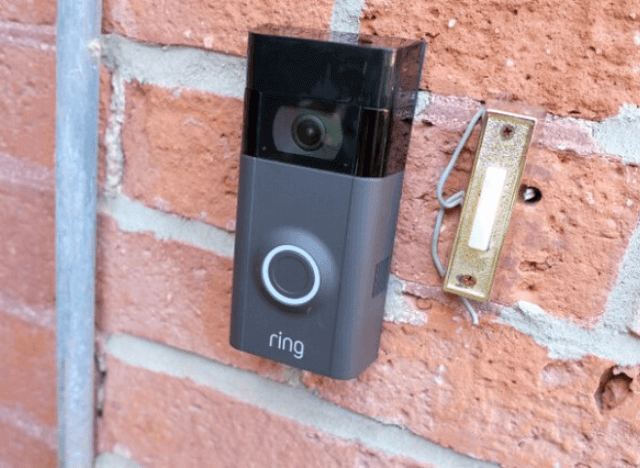 In any case, below are the instructions on how to do that.

How to Remove Ring Doorbell with a Screwdriver

Removing the Ring Doorbell with this method is a bit problematic, particularly when it comes with the screws. Still, here are the steps to remove a Ring Doorbell fastened with screws, using a screwdriver.

How to replace and charge Ring Video Doorbell 2 battery

How to Remove Ring Doorbell Pro

How to Remove Ring Doorbell Without Any Tools

This method of removing a Ring Doorbell is for those who used the alternative installation process. In this installation, you also had the same items – the smart doorbell and 6000 mAH battery. You also have to download the dedicated app and connect the device to your Wi-Fi to set it up.

Usually, you have to screw the Ring Doorbell to the wall to complete the process. In this method, however, you did not use screws but permanent outdoor mounting tape. Although it’s not the same with screws, a permanent tape can safely still stick your device to the wall. By using this, you have glued the doorbell to the wall, which may also be difficult to remove.

To remove a Ring Doorbell fastened by an outdoor tape, follow these steps:

If you used the permanent tape method when you installed the device, removing it is easier this way. Not that you can simply take out the Ring Doorbell, but you will not have to loosen each screw, which takes a bit of time. Similarly, you don’t have to worry that you may misplace them. With this method, you can remove the device with minimum effort.

How to Remove Ring Doorbell Faceplate

Besides learning how to remove Ring Doorbell, you may also want to know how to get the faceplate or cover off. It is something you would want to know in case you need to fix the doorbell or simply want to swap the cover for a different color. All you need is the screwdriver provided in the product box, and you can do this without a problem.

Here are the instructions:

That’s all there is in removing the faceplate of a Ring Doorbell. It’s great to know this if you want to exchange the color of the cover. There are several colors of faceplates available, and all of them are interchangeable. There are even silicone skins you can use to protect your device from the elements.

How to Remove Ring Doorbell’s Battery

In addition to the faceplate, it is also useful to know how to get the battery out. In that case, keep the following instructions in mind. Also, remember that this not apply to Ring doorbells with a charting cable at the back.

It’s all simple and easy. But it is even better if you have a backup battery. With that, you can quickly replace the battery you have taken out and charge it. You don’t have to wait before you can use your Ring Doorbell again if you do it this way.

How to remove Ring Doorbell Battery Cover and Battery

YouTube also has a lot of videos on removing Ring Doorbell. You can check them out for more reference.

All these instructions somehow make the Ring Doorbell hard to use. But that’s not true. The steps and tips mentioned above are all easy to follow. They are not overly complicated that you need to be tech-savvy or handy with tools. All you need is the included star-shaped screwdriver of the product, and you are good to go.

These are all great help. What if your Ring Doorbell stopped working because its battery depleted? What if the faceplate got ruined? Knowing how to remove Ring Doorbell can save you from unnecessary trouble and money. With the simple instructions in this article, we hope you can have a fantastic experience using your Ring Doorbell.